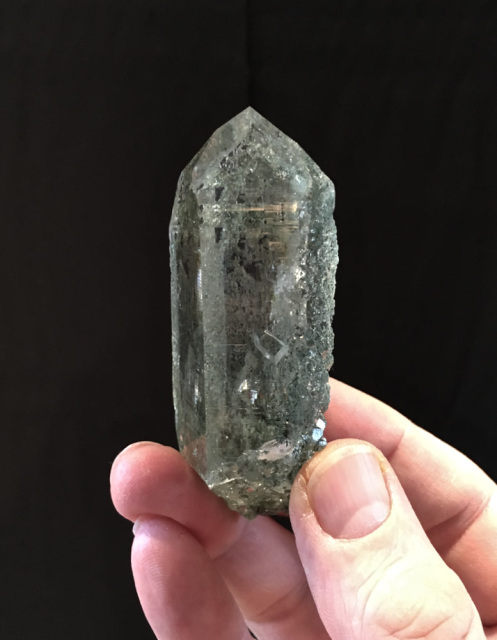 A unique etched HImalayan quartz with Chlorite inclusions. There are several penetration crystals entering the quartz from the etched back-side of the crystal. An intriguing, natural high-altitude Himalayan Quartz Crystal.

The term “Chlorite” refers to a group of clay minerals that form at cooler temperatures than quartz and it often enters the pocket in the latter phases of quartz formation. Chlorite, in this case, is a soft greenish color but it can occur in a variety of colors: grey, tan, reddish, white or brown.

In this quartz crystal we see an etched surface pattern on several crystal faces, a textured area where the chlorite adhered to the surface of the crystal.

Chlorite-included crystals are often found in Alpine-type environments such as the Himalayas. Alpine-type clefts or fissures are rare geological occurrences in which chlorite is often one of the more abundant minerals found. We have discovered chlorite inclusions in quartz, as coating or frosting on its surface and also as an associated mineral, attached to the exterior or matrix of the crystal.

Sold out
Add to Cart
Proudly powered by Weebly